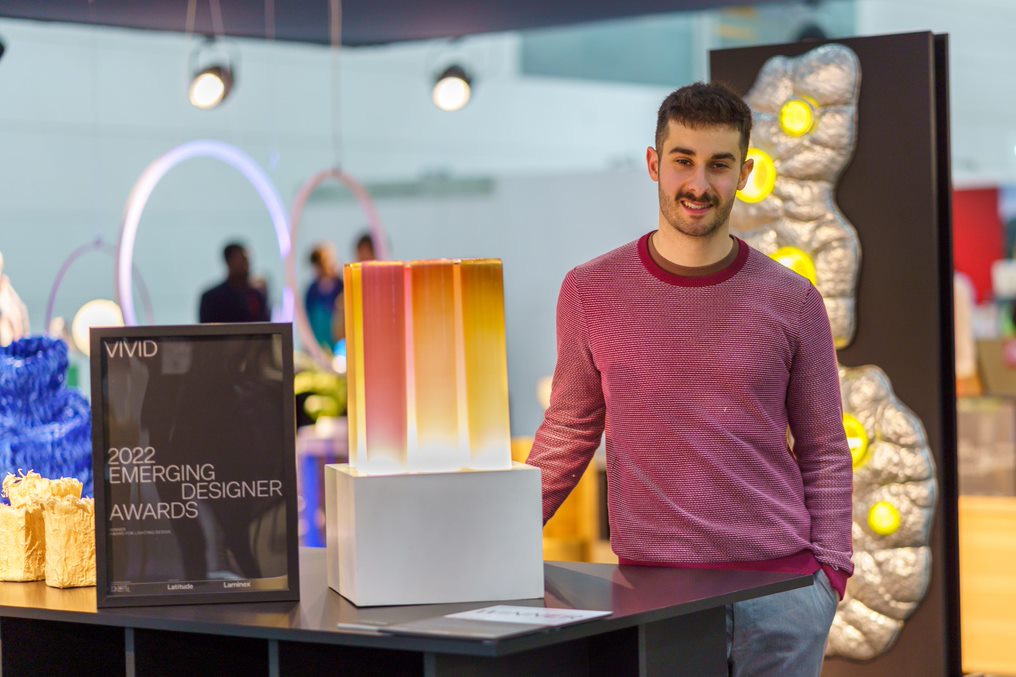 VIVID Design Awards shone with new design stars at Decor + Design & the Australian International Furniture Fair (AIFF) 2022 this past July. The 19th edition of Australia’s longest running competition for emerging designers proved that the future is bright! Designer Thomas Yeend impressed the judges with his beautiful piece REO Lamp, taking out both the Lighting and Colour categories.

Thomas founded Yeend Studio in 2017, specialising in the creation of hand-crafted, Australian-produced object and lighting design. The studio has become known for its signature use of colour and minimalist form, as well as dedication to function and sustainability. The work is both playful and refined, with inspirations in colour theory, material exploration, and user interaction.

We asked Thomas a few questions to uncover his design journey and inspirations, which range from the industrial brilliance of Brutallist design to the colourful virtuosity of Ettore Sottsass and the Memphis Group.

Thomas, tell us about your journey to becoming a designer maker. 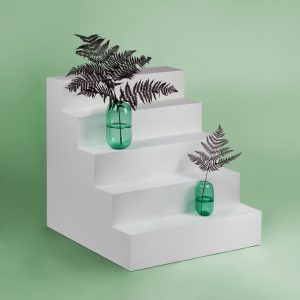 I’ve had creative interests for as long as I can remember. Throughout my pre-teens, I was really into photography, particularly film photography. I really liked the tactile nature of processing and developing the film. I also used to craft little bits of handmade furniture and lighting and really enjoyed the thrill of bringing an idea all the way to completion as something I could hold, use, and admire.

I originally went to university to study film photography, but while dipping my toe in a series of other electives and mediums, I really fell in love with glass. The material was really unlike anything else, offering great opportunities to play with colour and the material properties of glass, two really important elements to my creative process.

I was also exposed to a lot of incredible local and international designers throughout my university experience, and quickly realised that design was what I wanted to do. I loved the idea of design as a form of ‘functional art’; I wanted the work I created to be interacted with and appreciated in a tactile way in everyday life.

How would you describe your design approach and aesthetic?

I often like to describe my work as ‘style meeting joy’. Aesthetically, I aim to create work which exhibits a level of technical and stylistic finesse, while also maintaining an element of interactivity, surprise or play with the viewer. I aim to achieve these particular elements in various ways, such as a playful use of colour and material. In some cases, I’ll even aim for tongue-in-cheek titles for my designs, such as my KILO Table Lamps taking their form and namesake from an old-fashioned dumbbell weight. In short, I try to maintain an element of fun in my work. 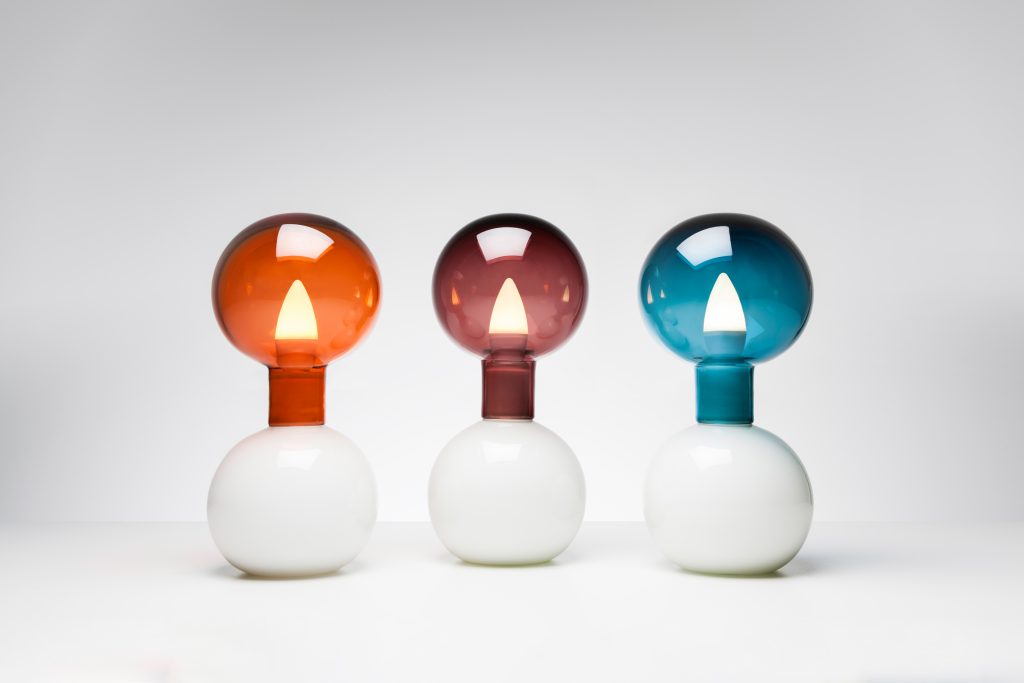 I think this influence goes back to one of my early and undying inspirations as a designer, being the Memphis-era designers. People like Ettore Sottsass and Shiro Kuramata, whose bold and joyous approach to colour, form, and material in their work continue to absolutely blow my mind.

Your piece REO Lamp won both the colour and lighting categories at VIVID. Can you tell us about the ideation and creation of this piece?

The REO Lamp was initially created as part of my 2021 debut solo exhibition, ‘JUBE’. I actually created a couple of pieces under the REO series name for the show; it’s been an ongoing series ever since.

I’d really been inspired by an overall brutalist, industrial aesthetic to design at that point, and wanted to create some work which played with this aesthetic in material and form, alongside my core medium of choice: glass. 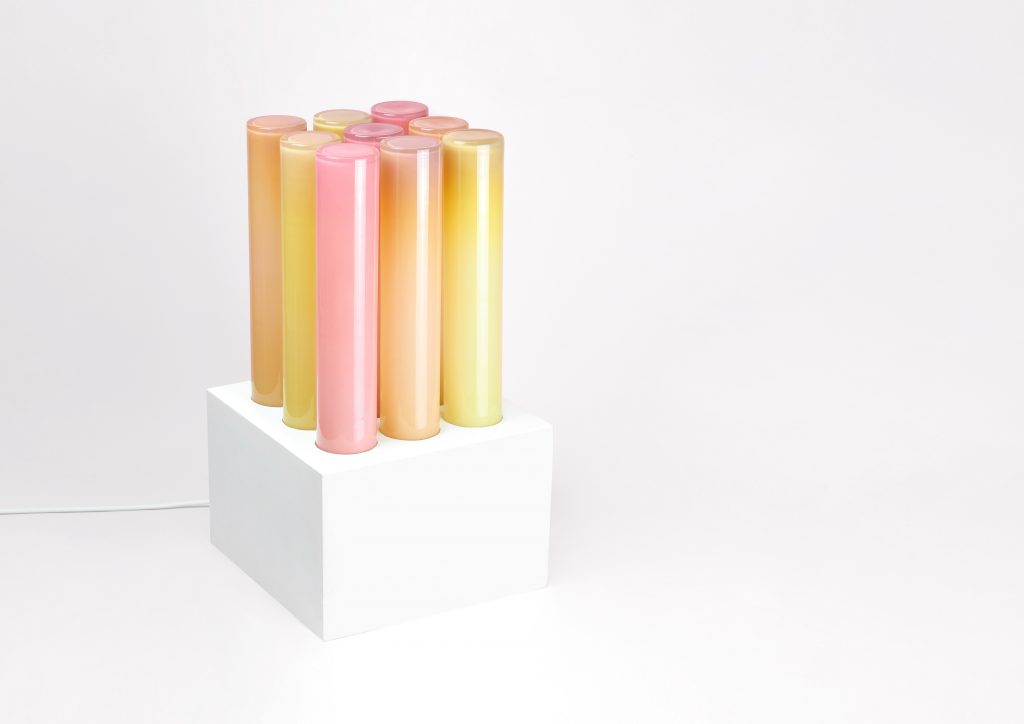 From this inspiration, REO was born; REO as a series takes its name from ‘reo rod’ or ‘rebar’; steel reinforcing rod used in concrete slabs and blocks. For the REO Lamp, I loved the idea of a sculptural light which embodied the look of a demolished concrete chunk, with my signature candy-like aesthetic of colours sprouting from one of its faces. It ended up being my favourite work of JUBE, and I’m so glad to see it have such a positive reception, including and especially at VIVID.

What’s next for you? 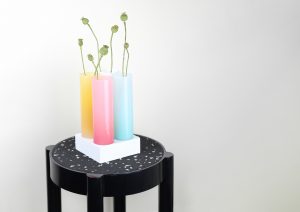 I’m currently working on a series of projects, including some exhibition works at CRAFT in December, and releasing my first lighting range early next year. I’ll also be present as part of Big Design Market in Melbourne December 2-4 for the very first time, which I believe will be an amazing experience. Over the past year or two, I’ve really enjoyed creating work that uses glass as a component in larger works, creating conceptual and bespoke lighting, furniture, and sculptural pieces. In future, I want to embrace that risk-taking nature to design, and continue to push the boundaries of glass as a material, of which I believe the REO Lamp to be the first of many projects to come.

Why are the VIVID Design Awards important for Australian emerging designers?

Attending VIVID for the first time in 2018 – and winning the Colour Award that year for my KILO Lamp Series – it was very apparent that VIVID offers some amazing opportunities as an early designer to showcase your talent in Australia.

I met a range of clients, peers, and friends through VIVID specifically that have been instrumental for my career trajectory as a designer.

VIVID provided the opportunity to connect with prospective buyers and collectors, while also acting as a really lovely melting pot to connect with fellow designers from around the country to see the amazing up and coming Australian design scene first-hand.

Providing a launchpad for Australia’s brightest design talent is a privilege of Decor + Design & the Australian International Furniture Fair (AIFF), Australia’s premier trade destination for indoor and outdoor furniture, soft furnishings, lighting, textiles and art. The 20th anniversary edition of VIVID Design Awards will take place at the show from 13 – 16 July 2023 at the Melbourne Exhibition Centre. Subscribe now to receive an update when 2023 entries open, plus other news from the world of interior and product design.